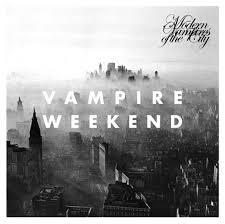 Or, if that title isn’t clever enough

Vampire Weekend Feels a Twitch Upon the Thread

As a confirmed hipster with snobbish inclinations, I often bore houseguests by handing them a home-brewed ale and forcing them to admire the sound of vinyl records spinning on my vintage turntable. A record that has been in frequent rotation is Vampire Weekend’s 2nd album, Contra, music that is delightfully energetic and engaging. The lyrics have always been clever and particularly appeal to me because they humorously describe locales in New England in which I have spent quite a bit of time (Yes, Hyannisport can be a drag). It’s always been a bit of a lark, though, which is fine, because sometimes in life we don’t need to be put through an emotional wringer to encounter good art. There is greatness in the talent of a humorist, something serious in a laugh.

For all of us, though, there is a season for everything, and for Vampire Weekend it is time to get introspective. In an article in the New York Times of May 18, 2013 entitled “Setting Their Sights On Wider Vistas,” lyricist Ezra Koenig says that he has come to see the band’s 3rd album, Modern Vampires in the City, as the completion of a trilogy. He then says something I would never in a million years have expected to come from a pop singer about his work, “It reminded me of ‘Brideshead Revisited.’” It reminded him of Brideshead! When asked to name my favorite novel, I cannot get the words “Brideshead Revisited” out of my mouth quickly enough to display my enthusiasm for Evelyn Waugh’s book. I will hound every single acquaintance for the rest of their lives until they both read the book and watch the miniseries starring Jeremy Irons. It is a beautiful, heartbreaking, insightful, and difficult piece of work. Not the stuff of your typical pop song.

Koenig goes on, explaining, “The naïve joyous school days in the beginning. Then the expansion of the world, travel, seeing other places, learning a little bit more about how people live. And then the end is a little bit of growing up, starting to think more seriously about your life and your faith. If people could look at our three albums as a bildungsroman, I’d be O.K. with that.”

The earlier work by Vampire Weekend corresponds to the first half of Waugh’s Book, a time of carefree living in Arcadia, new friendships, and the glamour of the English aristocracy. In time, the life of each member of the Brideshead family is complicated: Sebastian’s by alcoholism, Lord Marchmain’s by the prospect of an unprovided death without last rites, Julia’s by divorce and the guilt of living in adultery, and through it all is friend of the family, Charles, who is constantly searching for meaning. After a long absence, the Great War brings Charles back to a now abandoned Brideshead, the world is shattering, a proud family dissipated, and he has seen these halls before.

Earlier in the book, Charles declares loyalty to his embattled friend, fervently affirming, “No, I’m with you, Sebastian contra mundum.” The two men know that they are against the world. The vain hope of wealth and luxury, education and travel, career and women, these have all been shown to be shallow and unworthy. And yet, they do not know precisely what it is that they do want.

Vampire Weekend express much the same sentiment. They are world weary. They are on the lookout for something more, but remain conflicted by the hiddenness of God. In the song “Ya Hey” (Get it? Yahweh!) Koenig sings “America don’t love you/So I could never love you/In spite of everything” In “Unbelievers,” he sings, “…what holy water contains a little drop, a little drop for me?” In the end, is the band converted? Is Charles Ryder converted? The answer is never that easy, for the ways of the divine are mysterious and the human will is frequently late to love that which is lovely. Have no fears, though, this is the pilgrimage we all make. In Brideshead, Julia cries, “I’ve always been bad.  Probably I shall be bad again, punished again. But the worse I am, the more I need God…” Perhaps, she says, it is the case that, “however bad I am, he won’t quite despair of me in the end.”  The song “Arrow” ends with these words, “Oh it’s no use at all/But that life in the Church could still remain.” Indeed, for all of us in any situation, in a darkening world, the altar lamp still burns brightly. 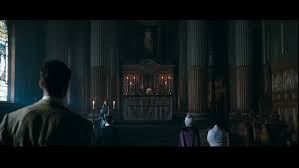 (With advancing years, my hipster credentials are slipping a bit and I missed the release of Modern Vampires in the City by almost a full year and am only now listening to it. The blog “Unpleasant Accents” has shown itself to be the true fan by beating me to this topic, writing on Koenig’s words about Brideshead Revisited back in the spring. I heartily recommend checking out their thoughts: http://unpleasantaccents.blogspot.com/2014/02/vampire-weekend-waugh-revisited.html )

The Rev. Michael Rennier lives in St. Louis with his wife and children. He has an MDiv from Yale Divinity School and is a Catholic priest in the Archdiocese of St. Louis. He is also a regular contributor at Aleteia.