My favorite task in the time I spent working in a cemetery was, by far, checking freshly dug graves. Full size graves for traditional burials would be dug by backhoe a day or two before, and I would arrive by seven the morning of the funeral to ensure everything had remained in good order through the night.

Late fall through early spring the sun was late to rise, so the grounds were dark. I’d angle my Toyota Corolla on the buckling asphalt road to stretch my high beams between headstones, bouncing their light off polished granite and rousing white tail deer that bedded down overnight on the graves. A shallow layer of black topsoil concealed clay beneath, highly prone to cave in. Lifting the plywood covering off the empty grave, I’d shine my cell phone’s flashlight around the sides and bottom and check for collapse or deep standing water in need of pumping out. My text to our gravedigger would either confirm that all was well for the day’s burial, or he needed to start his drive to our cemetery as soon as possible.

The dimensions assigned to a grave are four feet by eleven feet and each is mapped by three numbers corresponding to block, lot, and space. The grave is dug to specs of the vault a family chooses in which to place the casket, and the remaining area accommodates a headstone. Over months working with these numbers, my thoughts began to lend themselves to precise measurement and coordinates as well, in the form of poetry. It was a gradual but persistent inclination, at first unnoticed until I realized that the dark and solitary early mornings examining empty graves naturally trained themselves into stanzas in my mind.

I had poems for different circumstances, such as recalling memorized grave numbers, holding the rhythm of my stride to certain points in the cemetery, and my favorites for mornings I discovered a grave had in fact caved. Despite our gravedigger’s good nature and patience, I never texted him my little ditties. My morning report was either simply “Looks good, Gravedigger!” or a brief description of how advanced the cave in was. In my head, however, something akin to this is what was ringing:

Our ravine’s edge is steep,
Its slope so slick with dew.
Careful, Gravedigger, keep
Safe. Let’s not bury you.

This is all to say working among the graves became an experiential form of logic, a principle of organization intuited through whiplash inducing ranges of spatial and temporal relationships from the dates, countries and lineages engraved on the stones and their sheer number, to accommodating the next death that occurred, to, in the morning, lifting the plywood and discovering the remarkable state of emptiness yawning at my work boots’ toes.

At the especially tragic death of one young man from our parish last year, those close to him and his extended refugee community gathered, with wailing, to entrust his remains to the grave I’d checked that morning. I do not mean crying, but wailing. Everything that morning seemed to proceed in haste as his grave was in the first lot nearest the road, and in only a few steps the pall bearers lifted his casket from the white hearse and set it on the vault rig over the grave. The mourners parked within feet of the grave and congregated near the heap of dirt at its side.

I stood back from the mourners, along the ravine’s timber at the heart of our grounds where fox and deer would dart for camouflage during burials. Fox hid deep, but deer lingered near me on its edge. What appeared to be attentive listening to the priest and prayers of commendation on the part of our does and fawns was really impatience. They were eager to eat the floral sprays thick with roses and carnations they’d grown to expect would be taken from the casket’s lid to be left on freshly mounded dirt, once the backhoe filled the grave and was driven back to the shed.

Although familiar with the culture of this community and how they grieve, I was caught off guard when the wailing began. Even from the other side of the road their wailing visibly shook me and I reverberated with it, just like harmonics in tuning strings to each other on an instrument. It grew to a crescendo as the vault setter cranked his rig’s handle, lowering the young man’s corpse into the ground. My body and soul shuddered in recognition, but it wasn’t recognition of the mourners’ sorrow. It was, rather, the pain I experienced giving birth to my five children, the shock and release of them no longer held in my body. The same as this young man in the act of being separated from us by death.

The funeral director joined me, and together we watched as mourners took turns shoveling clotted clay and throwing fistfuls in bare handed, their wailing now resolved into song as they did the heavy work of filling the entire grave themselves. Deer would not wait for the backhoe that morning. “Have you ever been in the room with a woman in labor?” I asked the funeral director, struggling to regulate my breath as we watched the heap of dirt next to the grave grow smaller and smaller. “It feels like the exact same thing. It’s the same thing.” He had, at the birth of his own children, and he agreed.

I apologized for what I was afraid he’d take as a lack of professionalism, holding my lower abdomen with one hand, pressing the other against my heart. But his response surprised me: “Never get used to it. I’ve never gotten used to it.”

Because of my time at the cemetery I take deep solace in Holy Saturday, in Jesus’ sanctification of the graves of all who have gone to their deaths marked with the sign of faith. The earth received her King with joy in Christ’s incarnation, and again in scandal and sorrow on Good Friday when he was laid in Joseph of Arimathea’s tomb, but the earth will receive him yet again on the Last Day when all the dead will rise from the graves we bury them in. I hear this hope extended to those gathered for prayers of committal each time they are recited in our burial rites and I experience an overpowering longing for that Day, much like the deer peering through the underbrush of the ravine hanging on the same words. There is nowhere Christ has not been, nowhere he hasn’t gone in search of us, and nowhere we aren’t meant to follow him. This is the promise of the Resurrection.

I want to offer this reassurance to those I’m close to who mourn, but know better than attempting to infuse them with my weirdly conditioned joy at the sight of an empty and intact grave, or to share an odd bit of verse developed through months spent walking over consecrated ground. Rather than sharing anything like this, all I ever say to those who have lost someone they love is “I’m so sorry for your loss.”

What I really want to tell them is as we witness those we love being born to eternal life, our grieving can be as intense as the agony of childbirth, just as it racked me that morning along the ravine. I want to reassure those mourning that through the corporal work of mercy of burying the dead you deliver your loved one’s mortal body to the embrace of the earth, which cradles your beloved in the grave’s dimensions, until the day we all rise and face the East to hail Christ’s return. I want people to experience the mystery of how our birth and death, in the manner of Christ’s, share form and logic as stanzas in a poem do meter and rhyme. I especially want those of us who profess the Catholic faith to tune ourselves to the Life we find in Christ through scripture, sacraments, and the prayer of the Church and allow that harmonic to resound in us when it is struck elsewhere, most strongly in the face of death.

Every grave is meant, ultimately, to be as empty as Christ’s tomb was Easter Sunday. I had the great gift of experiencing this hope in the emptiness of each grave I inspected, during the same early dawn hour the myrrh bearing women discovered Christ had risen from his. While we wait for the fulfillment of that hope and especially as we commemorate the Triduum:

Lord Jesus Christ,
by your own three days in the tomb,
you hallowed the graves of all who believe in you
and so made the grave a sign of hope
that promises resurrection
even as it claims our mortal bodies.

Grant that our brothers and sisters may sleep here in peace
until you awaken them to glory,
for you are the resurrection and the life.
Then they will see you face to face
and in your light will see light
and know the splendor of God,
for you live and reign forever and ever. 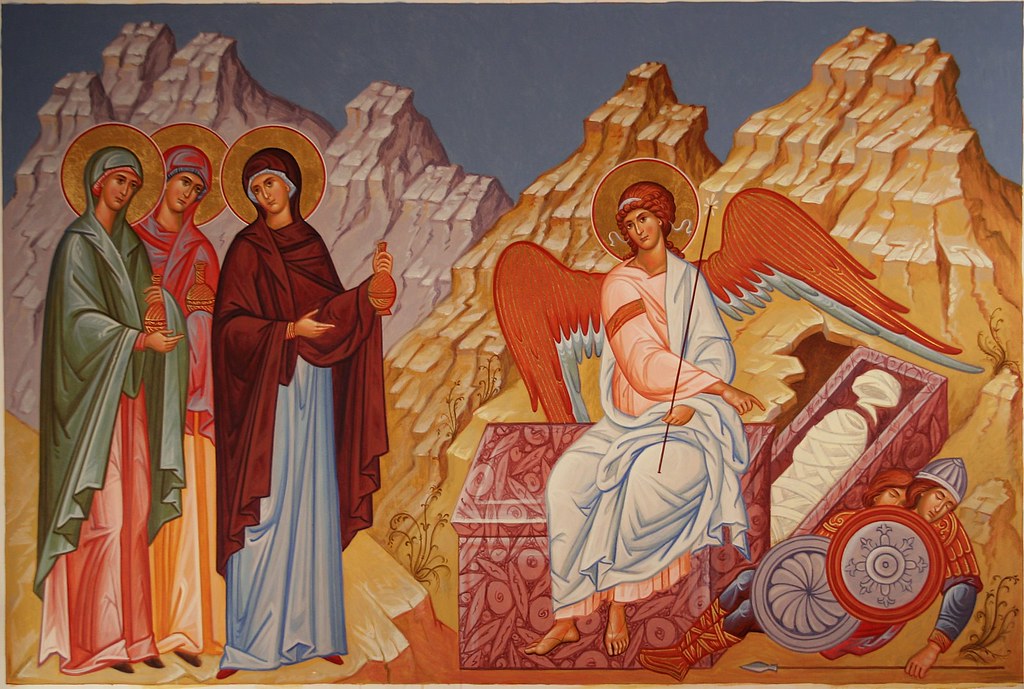 “Icon Myrrhbearing Women” by bobosh_t is licensed under CC BY-SA 2.0

Ann Thomas lives in Iowa City, Iowa with her husband and five children.  Her essays and poetry have appeared or are forthcoming in Image Journal, Forma, and St. Austin Review, as well as many others.  She serves as managing editor of Dappled Things.

This site uses Akismet to reduce spam. Learn how your comment data is processed.